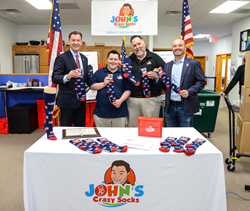 Let’s do something to bring people together and make them happy.

John Cronin, the award-winning entrepreneur with Down Syndrome and co-founder of John’s Crazy Socks, (http://www.johnscrazysocks.com) joined with U.S. Congressmen Andrew Garbarino (R-NY2) and Tom Suozzi (D-NY3) at the company’s Melville, NY headquarters on March 30th for a tour and special announcement event. Following a tour of the facility that employees over 20 people with differing abilities founders John and Mark Cronin hosted a special unveiling of their Congressional Unity Socks and announced plans to give them to all members of the U.S. Congress and U.S. Senate.

Flanked by Congressmen Garbarino and Suozzi, John Cronin unveiled the company’s Congressional Unity Socks. Designed by John with American flags spread across a field of blue, they were created to symbolize the unity and inclusion that binds all Americans.

Following the unveiling John Cronin stated “Let’s do something to bring people together and make them happy.”

“We may come from different backgrounds and have different political views, but we share a common belief in the promise of the United States of America. It is our intention to share our unity message and these special socks with each member of Congress. This is a non-partisan effort and we thank both Congressman Andrew Garbarino a Republican and Congressman Tom Suozzi a Democrat for encouraging our efforts to unite all Americans and spread happiness, which is part of our core mission at John’s Crazy Socks,” said Mark Cronin Co-Founder of Johns Crazy Socks.

Images of the socks that will be given to members of Congress can be found at https://johnscrazysocks.com/products/unity-flag-unisex-crew-sock.

“John is a remarkable individual who along with his father, Mark, know that with hard work, anything can be accomplished. These socks represent what we need in this nation today – unity. Together with the Cronin’s and my good friend and colleague, Representative Suozzi, we embrace this effort and welcome the opportunity to participate in the sharing of the important message of bipartisanship,” said Congressman Andrew Garbarino.

“Having constituents like John and Mark who are focused on inclusion and bringing people together is truly inspiring. Sharing socks with members of Congress may be a small gesture, but it carries a very important message. Unity is critical now and for the future of our nation,” said Congressman Tom Suozzi.

Congressmen Garbarino and Suozzi are longtime supporters and fans of John Cronin and his efforts to promote inclusion and the spreading of happiness. Garbarino, the first term member of Congress, championed the idea of creating the socks and working with John and his father Mark to give them to all members. Johns Crazy Socks is working with Congressman Suozzi to enhance the ability of people with disabilities to retain more of their earnings. Both Garbarino and Suozzi are members of the Congressional Problem Solvers Caucus.

The planning for the Unity Sock delivery and distribution is taking place now. A date for when deliveries will take place will be announced in the coming weeks. Some of the proceeds from sales of Unity Socks will go to support the Special Olympics and other not-for-profits.

The Unity Socks can be purchased at https://johnscrazysocks.com/products/unity-flag-unisex-crew-sock.

John’s Crazy Socks is a father-son venture inspired by John Lee Cronin, a young man with Down syndrome, and his love of colorful and fun socks – what he calls his “crazy socks.” The company is on mission to spread happiness. In 2019, John, Mark and the company received the prestigious Entrepreneur of The Year for the New York Metro Region from EY (Ernst & Young). The company sells “Socks You Can Love.” John’s Crazy Socks has a large selection of socks, a Sock of the Month Club, gift boxes and gift bags. The company is committed to customer service, most customers receive socks within two days. The company is built on four pillars: “Inspiration and Hope” by hiring people with differing abilities; “Giving Back” by donating 5 percent of earnings to the Special Olympics and selling products that raise money for other charity partners, including Autism Speaks, the Autism Society of America, the National Down Syndrome Society, and the Williams Syndrome Association (as of August 2019 the company has raised more than $300,000 these partners); For more information, visit the John’s Crazy Socks webpage, Facebook page, Instagram account or YouTube channel or contact at (631) 760-5625 or via email at service@johnscrazysocks.com.