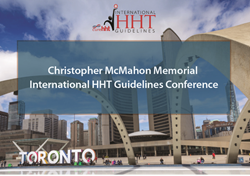 “These Guidelines will ensure effective and comprehensive treatment of HHT for patients worldwide,” stated Marianne Clancy, Exec. Director of Cure HHT. “Our efforts to successfully pair attendees, which included for the first time the powerful voice of HHT patients who battle this disease daily.”

In a critical effort to foster consistent, state-of-the-art care for people suffering from the hereditary disease HHT, Cure HHT hosted the Christopher McMahon Memorial International HHT Guidelines Conference in November, 2019, in Toronto, Canada. Completely underwritten by the generous support of the McMahon family, who have been deeply affected by the disease, the conference brought together 65 clinical physicians and patients from 14 countries and resulted in comprehensive new International Clinical Guidelines, just published in the Annals of Internal Medicine. The complete Guidelines are now available: visit https://curehht.org/ Cure HHT is the largest HHT advocacy organization and the epicenter of the national and global effort to advocate for HHT patients and families, raise awareness, sponsor critical research, advance treatments and find a cure.

HHT (Hereditary Hemorrhagic Telangiectasia), also known as Osler-Weber-Rendu Syndrome, is a genetic disease that affects families for generations. As common as ALS (Lou Gehrig’s Disease), it is the second most common bleeding disorder, affecting 1 in 5,000 people (an estimated 1.4 million worldwide). However, the disease is not well known and only 10% of those with HHT know that they have it. It causes malformed blood vessels in multiple organs of the body and typically begins with nosebleeds during childhood. HHT can result in stroke, brain abscess, anemia and heart failure, but proper diagnosis and treatment can prevent most of these complications.

Cure HHT has significantly advanced the awareness, treatment and research of the disease, especially over the past 15 years. Cure HHT is the only disease advocacy group supporting HHT patients in the United States, and the only one working across international boundaries. It sponsors and produces the biennial International Scientific Research Conference, most recently held in Puerto Rico in 2019, which brings together patients, scientists and physicians and provides an opportunity for cross-fertilization of ideas and research. Cure HHT has helped leverage more than $34 million in research grants since 2004, and has created and monitors 26 HHT Centers of Excellence (CoE) at hospitals and universities in the United States and Canada.

The HHT International Clinical Guidelines are used in all HHT Centers of Excellence for all clinical decisions related to HHT screening, management and patient care. In contrast to previous approaches in medicine, which were often based on tradition or authority, modern medical guidelines are based on an examination of current evidence within the paradigm of evidence-based medicine. They usually include summarized consensus statements on best practice in healthcare. A healthcare provider is obliged to know the medical guidelines of his or her profession and has to decide whether to follow a guideline’s recommendations for treatment. These guidelines can also be used by other medical professionals throughout the world, not affiliated with a CoE, who are seeing HHT patients. The Guidelines also dictate insurance reimbursement coverage for HHT patient screenings, treatments and surgeries.

Scientific and clinical advances have dramatically impacted the trajectory of HHT since the last Guidelines created in 2006, making it even more imperative that new and expanded Clinical Guidelines be developed to include new research and treatments, and to include significant changes and areas that were previously not addressed including pediatrics, anemia, pregnancy, gastrointestinal bleeding, liver AVMs and cardiac involvement. Furthermore the process of bringing together clinical and medical experts to seek consensus based on the wealth of available evidence creates a fertile environment for collaboration and new approaches.

“We couldn’t be prouder that our support of the Toronto conference has resulted in such a game-changing outcome,” comments Chandra McMahon, former Board Chair of Cure HHT. “The new Guidelines will have a profound impact on HHT screening, diagnosis and treatment. They will positively affect every person with HHT, a wonderful tribute to my brother-in-law Christopher and everyone in our family who has been affected by this disease.”

“These new Guidelines are an important turning point in the treatment of HHT,” adds Dr. Marie E. Faughnan, Director of the Toronto HHT CoE and Co-Chair of the Guidelines Conference. “The Guidelines provide a new plateau of shared knowledge, allowing doctors everywhere to further advance our service to our patients and our understanding of this complex disease.”

“These Guidelines will ensure effective and comprehensive treatment of HHT for patients worldwide,” stated Marianne Clancy, Executive Director of Cure HHT. “Our efforts to successfully pair attendees, which included for the first time the powerful voice of HHT patients who battle this disease daily with the medical experts, was the key to the successful completion of our new clear and cohesive Guidelines. ”

Most recently, Cure HHT was honored to receive a two-year capacity-building grant from the Chan Zuckerberg Initiative’s “Rare As One” Project to develop a patient-led Research Network which will accelerate its mission to find new treatments and a cure for the disease. A key driver of its success as the only international patient-led advocacy group supporting HHT patients has been its constant focus on collaboration between physicians, scientists and patients.

The HHT International Clinical Guidelines are indicative of how that kind of collaboration can create a new level of shared knowledge and best practices, propelling forward new understanding and state-of-the-art patient care for a rare disease.