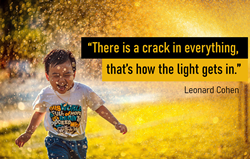 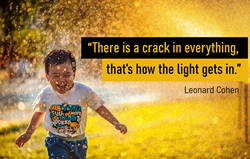 People who seek out the silver lining in negative situations are more hardy, content, and self-motivated than those who don’t.

Finding the silver lining is not about ignoring the reality of your life – it’s about recognizing that amidst the ashes burns a flame of hope.

When professor and author Randy Pausch was diagnosed with pancreatic cancer, he accepted his fate – perhaps with greater ease than most people would. Rather than become melancholic, however, he put together a final lecture in Carnegie Hall in which he offered simple yet deep advice on achieving one’s dreams. Randy Pausch took a negative situation and turned it into something that inspired millions of people worldwide. This inclination to seek out the blessings in an otherwise terrible situation can be powerfully cathartic, and has many other psychological advantages, according to research conducted by PsychTests.com.

Analyzing data from 12,259 people who took the Emotional Intelligence Test, researchers compared “Silver Liners” to “Downers” (people who are unwilling and/or unable to look for the bright side of negative situation) on different EQ competencies. The differences were staggering. Silver Liners scored significantly higher than Downers on a number of traits and skills, including the following:

“Trying to find the silver lining in a bad or traumatic situation is challenging and easier said than done,” explains Dr. Jerabek, president of PsychTests, the parent company of Queendom. “We become so fixated on the negative aspects that it seems impossible to pivot our mind toward something positive. But finding the silver lining is not about ignoring the reality of your life – it’s about recognizing that amidst the ashes burns a flame of hope. It’s about realizing that good can still come of a bad situation. Every painful or harsh lesson in life is an opportunity to learn and grow, and to gain the strength to tackle future challenges. Think back to the worst times in your life. What do you know now that you didn’t know then? Did it change your perspective? What lessons did you learn that you can now apply to your life? How have these experiences made you a wiser, stronger, or better person? How can you use your adversity or trauma to improve your life, or someone else’s? Take the time to really dig through the crap to find the silver lining – there will always be one – and continue to nurture this ability. It can really change your mood, mindset, and life in general.”

Want to assess your EQ? Check out our Emotional Intelligence Test at: https://www.queendom.com/tests/access_page/index.htm?idRegTest=3978

Professional users, such as HR managers, coaches, and therapists, can request a free demo for this or other assessments from ARCH Profile’s extensive battery: http://hrtests.archprofile.com/testdrive_gen_1

PsychTests AIM Inc. originally appeared on the internet scene in 1996. Since its inception, it has become a pre-eminent provider of psychological assessment products and services to human resource personnel, therapists and coaches, academics, researchers and a host of other professionals around the world. PsychTests AIM Inc. staff is comprised of a dedicated team of psychologists, test developers, researchers, statisticians, writers, and artificial intelligence experts (see ARCHProfile.com).