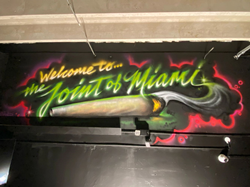 Get ready Miami, NJWeedman is coming to your city and I’m bringing the highlife! I’m beyond excited and very thankful that the platform Unleashed Entertainment will follow this journey as we open The Joint of Miami.

As the legendary NJWeedman boldly opens up a marijuana lounge in Miami, every moment will be captured in a new reality TV show. Unleashed Entertainment – a new social justice-oriented streaming platform – announced today that the show, “Miami’s Highlife with NJweedman” will be added to its cutting-edge, fearless line-up of entertainment.

NJWeedman is now headed to Miami to get sunbaked. His new marijuana lounge, The Joint of Miami will be located in the Wynwood Art District and is slated to open in early July.

“Get ready Miami, NJWeedman is coming to your city and I’m bringing the highlife! I’m beyond excited and very thankful that the platform Unleashed Entertainment will follow this journey as we open The Joint of Miami,” expressed Ed “NJWeedman” Forchion.

NJWeedman was a self-confessed weed smuggler in the 1990s who first achieved media fame when he was arrested smoking marijuana in front of the entire New Jersey State Assembly in 2000 and firing up next to the Liberty Bell in Philadelphia, PA during the Republican convention.

A vocal and controversial member of the pro-pot movement, NJWeedman has a longstanding history of fighting for the end of systemic racism and inclusion in marijuana legalization.

“When I first started my marijuana mission, pot was illegal everywhere and I was viewed as the underdog. The marijuana community as a whole has made so much progress, but it’s not over until marijuana is legal in every state in the nation,” he continued. “I’m coming to Miami to continue to cater to the cannabis loving community. My expansion to Miami is proof of progress yes, but until there is full inclusion and full representation of marginalized communities and the ending of systemic racism in legalization in this ‘new’ booming cannabis business, my battle continues,” asserted Forchion.

His new venture in Miami is certain to stir up some drama and Unleashed Entertainment will capture it all.

“Here at Unleashed Entertainment, we are committed to telling stories that are raw, real and breaking new ground. “Miami’s Highlife with NJweedman” will be not only crazy entertaining but will be unlike any other content you’ve ever seen before on television. It’s going to be quite a ride,” said Mike Donovan, President and CEO of Unleashed Entertainment.

Unleashed is your source for raw and relevant reality TV. With a focus on social justice, Unleashed Entertainment features reality programs that highlight our country’s criminal justice system, true American heroes, the fight for racial equality, and the stories no one else will tell. The platform launched in April 2021. Sign up at http://www.tvunleashed.com.