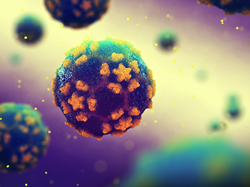 “The central idea is to switch from making vaccines that target individual outer shells [of viruses] to vaccines that target conserved replication proteins to potentially generate a vaccine product that could be protective against a much broader spectrum of enteroviruses,” says Belov.

With a new grant from the National Institutes of Health (NIH), the University of Maryland (UMD) is working to develop a novel approach to vaccination with the potential to provide broad-spectrum protection against hundreds of viruses in a single vaccine, from polio to the common cold. Enteroviruses are a diverse group of viruses creating a huge public health burden, including the poliovirus, rhinoviruses that are the major cause of the common cold, enterovirus 71 that causes hand-foot-and-mouth disease in children, and others that are associated with the development of diabetes like coxsackieviruses. But because of this diversity, only polio and enterovirus 71 have currently available vaccine products. By changing the way vaccines are developed, targeting the conserved replication proteins that are common among most enteroviruses instead of the structural proteins that are distinct to each of the hundreds of known enteroviruses, UMD’s College of Agriculture and Natural Resources will explore the potential to confer protection against a broad spectrum of enteroviruses in a single vaccine product, with major implications for public health.

“All viruses are pretty much like a nut,” explains George Belov, associate professor in Veterinary Medicine at UMD and lead investigator of this work. “You have the shell or husk, and then the material inside the husk. On the outside, the structural proteins look sufficiently different so that that immune response developed against one virus does not work against another. But inside, you have pretty much the same core of proteins the virus uses to replicate. The replication machinery of all of those viruses is very similar. So the central idea of this grant is to switch from making vaccines that target those individual outer shells to vaccines that target conserved replication proteins to potentially generate a vaccine product that could be protective against a much broader spectrum of enteroviruses.”

The technology to achieve this goal has only recently become available with constructs that Belov and his team developed to redirect the immune response when encountering a new virus. “What you need to do is remove the input of the outer structural proteins and present the immune system with only the antigens that come from the conserved replication proteins,” says Belov. “And we have a tool now to do this with constructs that don’t express the structural proteins. We want to see if this will be protective and if that protection extends across a broader spectrum of enteroviruses.”

This is a roughly $500K proof-of-concept grant that, if successful, could represent a shift in the way that vaccine products are produced and significantly reduce the burden of vaccination for a public that is increasingly concerned about the growing number of necessary vaccines.

“It’s always a risk-benefit question, because the more vaccines you add, the chances of getting complications from a vaccine product are higher. The risk is very low as a whole, but there is no absolutely risk-free product, and there are always people that will respond differently. So if you can protect against multiple viruses in the same product, that is a very desirable thing.”

With this initial funding in collaboration with Konstantin Chumakov at the Food and Drug Administration Office of Vaccines Research and Review, Belov and his team will be focusing on comparing this new vaccine approach to the existing vaccination products for poliovirus.

“You currently have three different serotypes of poliovirus with three vaccines, but the replication proteins are essentially the same,” says Belov. “With this grant, we want to vaccinate with the construct we developed that expresses conserved proteins and see if the product will protect against those three different serotypes of polio compared to the current established vaccine products. We have good preliminary data that supports this idea, but the ultimate test is in how the animal immune system will respond. Further, we will test if it works against non-polio viruses. Enteroviruses are a very broad group of viruses, so broad protection is very valuable.”

This problem is one that is common not just in enteroviruses, but across all forms of vaccine development. “If you want to develop a vaccine for COVID-19, for example, you currently have to make something that is specific to the structural proteins of COVID-19. But if you could make something that is effective across all types of coronaviruses by targeting the replication proteins, you could protect against a large spectrum of coronaviruses, the ones that we know of now and the ones that may come down the road as new virus threats.”

Belov has been working with enteroviruses for more than 20 years and is interested in their functionality on a cellular level. “Vaccine development is very important, but enteroviruses are fascinating in terms of what they do with the cell. A cell with an enterovirus changes its metabolism completely in a matter of hours. It can completely overrun all cell control mechanisms, so the cell basically becomes a zombie that does nothing but produce copies of the virus. It’s interesting for both the virologist and the cell biologist because the virus exposes the mechanisms that are difficult to observe in a noninfected cell. And that is my expertise – virus-cell interactions.”