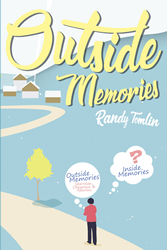 “Outside Memories”: a poignant account that journals victory against emotional and mental suffering, temptations of suicide, failed relationships, and traumatic circumstances brought by God’s healing grace. “Outside Memories” is the creation of published author Randy Tomlin, a writer who lives in Gresham, Oregon. He has written two plays, which have been produced, and he loves to write Christian music as a hobby. He is working on a number of short stories he hopes to one day have published.

Tomlin shares, “Raised in a time when little was known about learning disabilities, severe ADHD, or bipolar disorder. When counseling was only available to the wealthy and there were no terms or understanding for such things as ‘dysfunctional families,’ ‘survivor’s guilt,’ or ‘post-traumatic stress disorder.’

“Randy Tomlin learned to survive. He survived emotional abuse, two attempts at suicide, broken marriages, and being held at gunpoint while his girlfriend was raped. He surrendered to God and eventually, as counseling became more available, Randy was encouraged to journal his story and the healing journey really began.”

Published by Christian Faith Publishing, Randy Tomlin’s new book is a triumphant tale of laying down one’s trust to God to break away from the darkest corners of life.

Randy’s journey pulled him to the pits in a spiraling downfall, yet he managed to hear God’s call and now he’s inviting everyone to rise in faith.

Consumers can purchase “Outside Memories” at traditional brick & mortar bookstores, or online at Amazon.com, Apple iTunes store, or Barnes and Noble.

For additional information or inquiries about “Outside Memories,” contact the Christian Faith Publishing media department at 866-554-0919.