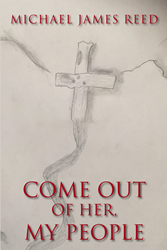 Reed writes, “Michael James Reed gives all glory to the Lord in this passionate plea to all people of his former religion, Roman Catholicism, to come to the knowledge of God’s Word over what he demonstrates is the word of men, Roman catechism. Although Michael targets Roman Catholics, ‘Come out of Her, My People’ is truly essential reading for Evangelicals as well due to its wealth of biblical information and doctrinal insight. The Protestant churches of the world have been beguiled into accepting many of Rome’s errors, and ‘Come Out’ is a stark reminder to all who consider themselves biblical to not be unequally yoked to such an institution. Ultimately, Michael has done a masterful job of lifting the veil of Christianity that the pagan Church of Rome has been hiding under since the Edict of Milan in AD 313. He has also exposed one of Rome’s leading apologists, Karl Keating, as a false teacher who gave demonstrably false information to his readers in order to lead them away from biblical truth. Furthermore, Michael’s stunning, new revelations of Mystery Babylon give new light to that false end-time church all Christians should be aware of. Michael asks all Roman Catholics to search the Scriptures for themselves in order to truly know their Lord and Savior Jesus Christ. For the name of Jesus is above every other name and the only name by which we are to be saved. From the man or woman on the street to the most highly esteemed theologian, all who read this book will come away with at least some new knowledge of God. Michael has put his heart into this work to bring the knowledge of Jesus Christ to his people, Roman Catholics, and warn them of the road on which they are traveling.”

Published by Christian Faith Publishing, Michael James Reed’s new book is an eye-opening reminder for the readers to travel the road with humility in order to reach the final destination God has provided for them.

View a synopsis of “Come Out of Her, My People” on YouTube.

Consumers can purchase “Come Out of Her, My People” at traditional brick & mortar bookstores, or online at Amazon.com, Apple iTunes store, or Barnes and Noble.

For additional information or inquiries about “Come Out of Her, My People,” contact the Christian Faith Publishing media department at 866-554-0919.