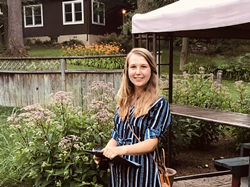 “I want to have some part in creating landscapes that are more equitable, especially for people with disabilities,” says Wilke. “I think it is so forgotten because most designers haven’t had a firsthand experience. I don’t think it will change unless someone riles up some change.”

In time for National Disability Awareness Month, the Landscape Architecture Foundation (LAF) recently named Audrey Wilke of the University of Maryland Department of Plant Science & Landscape Architecture as an Olmsted Scholar, one of only eight students to receive this top national honor among students in landscape architecture. As a finalist of the Olmsted Scholars Program, Wilke is using her award funds to create a comprehensive guide for disability-inclusive landscape design in the industry. While the Americans with Disabilities Act (ADA) has set minimum standards for accessibility, Wilke is fighting to change the designer mindset from accessibility to a truly inclusive user experience that considers the perspectives of all those using outdoor spaces. She has seen firsthand as a student with dyslexia how her disability can actually be an advantage as a designer, and how a better understanding of all disability types can help future designers produce more inclusive and welcoming work.

“I want to have some part in creating landscapes that are more equitable, especially for people with disabilities,” says Wilke. “I think it is so forgotten because most designers haven’t had a firsthand experience with disabilities, so it’s easy to get lost in ADA code. Unless you have that experience of having to go around the side of a beautiful outdoor space to find a ramp and feeling forgotten, it won’t be the first thing you think about. I want to draw that to designers’ attention more broadly because I don’t think it will change unless someone riles up some change – it’s not just going to happen on its own.”

To help inspire this change, Wilke decided that when applying for the Olmsted Scholars Program, she would share her experiences as a dyslexic student to help shed additional light on the issue of inclusivity.

“Even just to write about my experiences, it was very personal to me,” says Wilke. “To put myself out there so vulnerably and so authentically about the challenges I have faced and to have people acknowledge that is truly amazing. I was so overjoyed to receive this award. Disability is actually the largest minority group, but it’s often forgotten or not thought of that way.”

At the same time, Wilke expressed the many strengths that being dyslexic has given her as a designer.

“Landscape architecture is not only something I love for the impact on people’s lives and the time outdoors, but it actually works a lot better with my brain,” explains Wilke. “Dyslexics often struggle with memorization which is the basis of a lot of traditional education programs, but aside from memorizing plants and trees, LARC [the College of Agriculture & Natural Resources’ Landscape Architecture program] teaches concepts and how to apply them, and that’s what I’m really good at. Another strength from my dyslexia is that I have an easier time with spatial reasoning and visualizing things in my head, and that’s been really helpful for design. I remember doing exercises where they give you a shape and you have to rotate it in your mind and draw it, and I was so fast at it I was helping other people in the class. I would struggle in the lower level math classes, but once we get to more conceptual work, I can do it easier than some of my classmates, so it’s interesting to see that you have to put effort into the opposite areas.”

Wilke laughs, “I would have more trouble in third grade than in my last year of my undergraduate program. If you had me go back and do spelling tests again and memorize multiplication tables, I’d fail that again without spending three times as long on memorization as most people. And I think that the education system doesn’t really have a firm grasp on that either because a lot of people just don’t even make it past those elementary and high school years to get into college because it’s so hard for them in the beginning, and dyslexics excel after that.”

Wilke says that one in five people are actually dsylexic but may never be diagnosed or get the learning accommodations they need, but also that there needs to be a better understanding of what and why accommodations are needed for those with disabilities.

“I think it comes down to lack of awareness,” says Wilke. “I think a lot of people don’t understand disability or accommodations. Accommodation isn’t an advantage I’m getting, it’s bringing me up to an equal playing field.”

Wilke says that the Social Theory of Disability really helped her reconceptualize her own dyslexia, as well as the disabilities of others. The theory states that disability is not a fault within a person, but is rather the result of a society not being built for everyone. “So there’s nothing wrong with the way I think or the way my brain functions,” says Wilke, “but the problem comes when everything is taught to a different way of learning or a different brain structure. That really flipped everything on its head for me outside of just my own disability story. The problem isn’t someone using a wheelchair, the problem is the building that doesn’t have stairs or the cobblestone paving that is difficult to navigate.”

It is this revelation that motivated Wilke to become an advocate for others with disabilities the way she has had to advocate for herself.

“Being dyslexic through my lifetime has really taught me that you have to advocate for yourself because no one else is going to, and that you have to put in the time,” says Wilke. “I don’t have a physical disability, but I have the empathy from my own experiences. It’s those moments when someone makes a joke about dyslexia and I think, ‘Okay, well I know this is how people with physical disabilities feel when they are excluded as well.’ So I’m going to apply my skills and my experiences to help.”

Wilke says there are guides in landscape architecture for ecology and stormwater, so a guide for disability-inclusive design could make a difference in the industry. With her funds from the Olmsted Scholars award, she is currently interviewing people in the disability community to learn from their experiences so that designers can be better informed.

“Unless you’re experiencing it yourself, you’re going to miss a lot,” says Wilke. “People talk about ADA compliance, but never about user experience. So I decided I was going to walk only non-stair routes for two months to see what the difference is. Ramp routes are so much longer, you can’t easily tell if a sidewalk ends in stairs and you’ll have to backtrack, they often take you by the trash cans instead of the landscape, and a lot of older ramps have high barriers enclosing them to try to hide them, which makes you feel unsafe at night. And that was only one experience – there are so many more disabilities. For example, difference in texture is really good for people with visual impairments, but bumpy textures can be hard for people with knee scooters. And people’s experiences when they are on the autism spectrum are completely different. When plants are really fragrant, it can be overwhelming. Or if the water feature dominates the space, people can’t find a less overwhelming spot to take a break. It goes against some of the design principles that you’re taught in school because fragrance gardens or water features relax a lot of people, but for some it is their worst nightmare, so how are we accommodating them?”

In addition to working as an apprentice landscape architect after graduating in Spring 2020 and working on her Olmsted guide for disability-inclusive design, Wilke is also still an active member of the President’s Commission on Disability Issues (PCDI) Student Advisory Committee (SAC).

According to Paul Jaeger, professor in the College of Information Studies and a co-chair of the PCDI, “PCDI is the primary advocacy organization for disabled people at UMD. It is an all-volunteer organization with about three dozen members representing most units on campus. We consult with campus leadership on disability issues and policies, and provide reports to campus leadership regarding campus needs related to disability. We also provide materials and events to educate the campus about disability.” Together, the board is helping raise awareness for disability issues on campus and beyond to create a more inclusive environment for all.

“Going from accessibility to inclusion requires a change in mindset from, ‘Let’s make things easier for people with disabilities’ to ‘Let’s make things easier for all people,’” says Adith Thummalapalli, a founding member of the PCDI SAC and recent graduate in Spring 2020 with a bachelors in mechanical engineering. “Inclusion is associated with all people, and measures to achieve inclusion can oftentimes benefit those without disabilities as well. For example, installing a ramp doesn’t just help people who use wheelchairs or have mobility impairments. It helps the elderly, people with small children in strollers, people who have suffered broken bones, and more. The events this month for Disability Awareness Month [October] all relate to changing the mindset by way of conversation and sharing many different perspectives.”

As these issues gain more traction, Wilke and the others feel that things are truly on a path to change. “People are genuinely very interested in the work that I’m doing, and that’s incredibly touching,” says Wilke. “Sometimes on the disability board, we are fighting this fight and it can feel like change comes so slowly. But to see people in the landscape architecture community taking notice with this award, and having the support of my professors in LARC for this work has been really touching. It’s a genuine honor.”

To learn more about the events coming up this month for National Disability Awareness Month, visit https://pcdi.umd.edu.