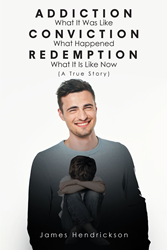 James Hendrickson, a devoted family man and retired counselor, has completed his new book “Addiction What It Was Like Conviction What Happened Redemption What It Is Like Now (A True Story)”: a potent tale of self-discovery and growth.

Dear reader: In this riveting true story, you will be amazed at the devastation, dysfunction, addiction, and finally, success in the life of the author! He has reinvented himself several times in his seventy-five years on this earth. Living his first four years in a city near Trenton, New Jersey, he moved to a small tenant house on a farm in New Egypt, New Jersey, where the dysfunction began. He lived there with his parents and siblings—always feeling poor, hungry, and abandoned! When he was ten years old, he began doing anything he wanted to do and became a juvenile delinquent.

His father passed away when he was twelve, and his mother moved the family to Bordentown, New Jersey, where he felt lost and alone. To ease the pain, he began drinking and hanging out with older teenagers because it made him feel older. He was restless most of the time and began to look for adventure in the wrong ways. Drinking was not an adventure anymore, but stealing cars was! Three court appearances later, he had to reinvent himself for the first time.

Now fifteen years old, it was time for another reinvention. He thought he would settle down and change his ways if he had a girlfriend. The first girlfriend didn’t work, and girlfriends became another addiction over a period of three years. Alcohol and women weren’t working either. The early dysfunction was still there!

The chaos went on for nine more years before the redemption started; all those in recovery know what the chaos is, but the author lets you know how it works after redemption.

Forty-eight years sober, with twenty-five as a licensed addiction counselor, his story will amaze you with hope and inspiration.

Published by Page Publishing, James Hendrickson’s autobiographical tale is one of ugly truths, loving forgiveness, and the drive to help others overcome their own struggles.

With a lifetime of experience on both sides of the process, Hendrickson offers an authentic voice to a painful topic.

Readers who wish to experience this inspiring work can purchase “Addiction What It Was Like Conviction What Happened Redemption What It Is Like Now (A True Story)” at bookstores everywhere, or online at the Apple iTunes Store, Amazon, Google Play, or Barnes and Noble.

For additional information or media inquiries, contact Page Publishing at 866-315-2708.

Page Publishing is a traditional, full-service publishing house that handles all the intricacies involved in publishing its authors’ books, including distribution in the world’s largest retail outlets and royalty generation. Page Publishing knows that authors need to be free to create, not mired in logistics like eBook conversion, establishing wholesale accounts, insurance, shipping, taxes, and so on. Page’s accomplished writers and publishing professionals allow authors to leave behind these complex and time-consuming issues and focus on their passion: writing and creating. Learn more at http://www.pagepublishing.com.