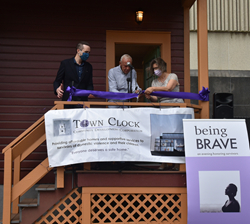 “It was important to Barbara that battered women and their children have a safe place to go for help,” says Leonard Littman,

During National Domestic Violence Awareness Month, Town Clock Community Development Corporation welcomes a mother and her three children into a safe, permanent home. Formerly the sexton house for the First Reformed Church of New Brunswick, this newly renovated historic home allows Town Clock CDC to fulfill its mission to provide sanctuary for an entire family. Dedicated as the Barbara Littman House, this is the organization’s first expansion since 2016 when it opened Dina’s Dwellings, a facility of 10 supportive, affordable, permanent, housing units for survivors.

“Dina’s Dwellings was a special cause for Barbara near the end of her life. She had been helping causes for battered women in Jerusalem when we learned about Town Clock from the wife of a high school friend. It was important to Barbara that battered women and their children have a safe place to go for help,” says Leonard Littman, who was married for 53 years to Barbara, a devoted mother of three, grandmother of 10, design pioneer, teacher, professor and passionate philanthropist.

“Barbara would have been honored to know this house was named for her. She loved children and started her career as a kindergarten teacher in the Head Start Program. Barbara would be very happy to know she is still helping children,” says Littman who points out that Barbara became an accomplished ASID and award-winning interior designer whose work was in many publications including House and Garden and Home Beautiful. In her 50s, she got a masters degree in architecture and worked in that field. Video highlights of ribbon-cutting ceremony.

“We did well in life and believe you have to give back to the community. We wanted to help locally, where we got our start in business,” says Littman, whose father opened the original Littman Jewelers in New Brunswick in 1934. “To me, Barbara was the finest person I ever met in my life. She loved everyone and everyone loved her. She was beautiful inside and out.”

According to Town Clock CDC Executive Director Reverend Susan Kramer Mills, “We are extremely grateful to Leonard for his support and continuing Barbara’s legacy of helping survivors of domestic violence. We are so proud and honored to be able to remember such a wonderful woman in a way that is especially meaningful to her, her family and our community.”

The Barbara Littman House was made possible by grants from the New Brunswick HOME Housing and Urban Development Fund and the Middlesex County Housing First Capital Grant. It also was made possible because of private donations from Leonard Littman, Judith Johnson and Bruce Bush, Christine and Benjamin Bucca, and the Domestic Violence Response Team, Woodbridge. In-kind support was provided by Jennifer Ganley, Architect, PS&S; Elizabeth Garlatti, and Three L & Co.

Town Clock Community Development Corporation is a nonprofit, 501(c)3 organization. Town Clock CDC’s facility (Dina’s Dwellings) opened in April 2016 after the sanctuary of the 200-year-old First Reformed Church of New Brunswick was transformed into 10 long-term affordable housing units with supportive services for survivors. In October 2020, Town Clock CDC expanded its facility by transforming the church’s sexton house into a home for a mother and up to five children. This housing model is one of only 40 establishments of its kind in the entire United States, and remains the largest, permanent housing program for survivors of domestic violence and their children in New Jersey. In 2019, Town Clock CDC launched the Being Brave Event & Award.

Being Brave 2020 will be a virtual celebration of the enduring and creative strength of survivors who are rebuilding their lives after domestic violence. This uplifting and inspirational broadcast will take place on Thursday, October 22, 2020, at 7:30 PM. Full press release.