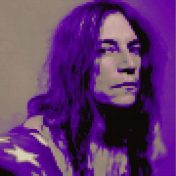 Artist, Technologist and Digital Innovator Steven Sebring released his first NFT featuring legendary Artist and “Punk Poet Laureate” Patti Smith on SuperRare today, entitled patti punk. Culminating in a Sundance Award for Excellence in Cinematography in 2008 for Patti Smith: Dream of Life, Steven and Patti spent over eleven years together documenting her journey back to the stage from a sixteen-year hiatus.

Over the past 25 years, they have collaborated on a wide variety of artistic projects from books and films, to live performances and art installations – establishing a palpable sense of trust and mutual respect for artistry and harmony between them. With genuine appreciation, Smith notes that Sebring always captures her as herself and does not influence any version of herself, past or present.

The patti punk NFT is a result of their journey together and the evolution of Sebring’s technological approach to image capture with his proprietary technology.

According to Smith, “the essence of punk in 1974/’75 was freedom. Freedom in the way we expressed ourselves, dressed, and performed. It let the artist feel freedom and they were just themselves.” This is Punk. “The work that one does and the work of one’s energy.” Also noted by Smith, “I can still put my foot through an amp and at the same time scrub my floors and take care of my children.”

While happy to be the “Godmother of Punk”, Smith acknowledges that “each generation translates what punk [rock] means to them” and believes that new generations should define themselves by their own experience rather than by those who came before them. To Smith, the essence of Punk is Freedom. She acknowledges the originating artistic process, but once it is given to the people, it is theirs and it may transform. Without any territorial feelings, she notes, “We kick the door open and let the new people take it. Break on through to the other side.”

Sebring is a purist when it comes to the capture process. “I hope people see the connection I have with the subjects I photograph,” says Sebring noting that photography is the only way to capture moments. However, Sebring embraces technology, even developing his own, as a tool for the continuous exploration and evolution of his art.

Sebring photographed Smith in 1999 for her album “Gung Ho” using Polaroids. The single capture of the moment and seeing it physically was a distinctive experience for him. In 2005, Sebring embraced digital technologies to be able to create multiples of his work. He used a scanner to digitize the images and software to pixelate them, combining pure capture with technology to explore new ways of seeing these moments. These steps were only the initial explorations of his artistic innovation.

The resulting images were shown in Illuminations: Who Are Poets, an exhibition of photography and installation works by Sebring at the Milk Gallery in April of 2011. The exhibition featured Patti Smith, Michael Stipe, Jim Carroll, Joey Ramone, Neil Young and Philip Glass. Based on the concept of looking at a piece of stained glass up close and not being able to discern the overall image, the pieces in Illumination give the viewer a sense of this discovery. When moving back and scanning images with a phone, the photographs would emerge clearly to the viewer.

With NFTs, Sebring is embracing the new world, reimagining the process of capturing, creating, and displaying art that evolves over time.

An Artist, Emmy-nominated Director, Photographer and self-proclaimed “Photo-Scientist,” Steven Sebring is the creator of SEBRING REVOLUTION, a media company using proprietary camera systems designed by Sebring to create immersive and interactive storytelling experiences. For more than 25 years, Sebring has collaborated with innovators in the realms of fashion, music, art, sports and film. He is the recipient of the Sundance Excellence in Cinematography Award, multiple Clio Awards, and received an Emmy nomination for his full-length feature film, Patti Smith: Dream of Life.

An Artist, Poet, Activist, Singer-Songwriter, Traveler and known “Punk Poet Laureate,” Patti Smith is an icon and inspiration to the world. She was an integral part of the downtown NYC arts scene in the late 1960’s. Her debut album Horses was a significant influence on the Punk music scene in the 1970’s. In 2007 Patti was inducted into the Rock and Roll Hall of Fame and she has won numerous awards including the National Book Award in 2010 for her memoir, Just Kids.